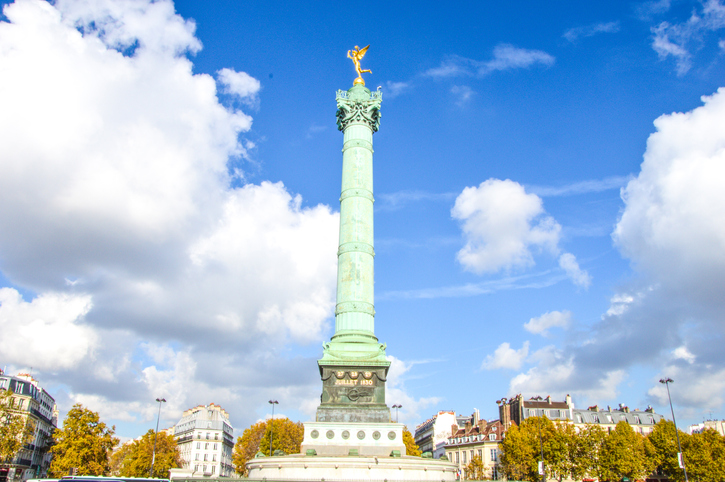 There may be only a few foundation stones left today, but the Place de la Bastille is still one of the most evocative sites in Paris, luring millions of visitors who want to see the fabled spot for themselves. Every year on Bastille Day (July 14), the French celebrate the attack on the medieval fortress in the Marais district as the start of the Revolution in 1789, which—despite its violent excess—is still remembered as a moment of glory.

At the time, the Bastille was the most notorious of royal prisons, where the king could send subjects for years without appeal. It had gained a grim reputation in the Middle Ages as a place of torture and misery, but by the 1700s, a sentence there was hardly an unpleasant experience—at least, if you had some cash in the family. Aristocrats were allowed to bring a small personal serving staff and decorate their prison cells as they wished, with their own feather beds, wall paintings, and personal libraries. They could even order delicacies from the best Parisian kitchens. The food delivery records of the Marquis de Sade, who was a Bastille resident for five years, reveal his specific taste for fresh roast chicken, local pâté, oysters, seasonal vegetables, fine wine, and cognac. Despite this luxury, the Bastille remained a symbol of the injustices of the old regime.

When the Parisian mob chose to attack the hated fortress in 1789, there was nothing heroic in the act. The governor of the prison and his men were guaranteed safe passage, but they were instantly set upon by the crowd and massacred—a drunken chef cut off the governor’s head with his pen-knife and it was paraded around Paris on a pike. The rioters were then surprised to find only seven inmates in the entire prison, none of whom were very worthy of liberation: two lunatics, four forgers, and a young gent charged with incest. Still, it remained a symbolic moment of victory. During the Revolution, guides led visitors around the Bastille, showing off fake manacles with exaggerated tales of the prison’s horrors, until it was finally dismantled.