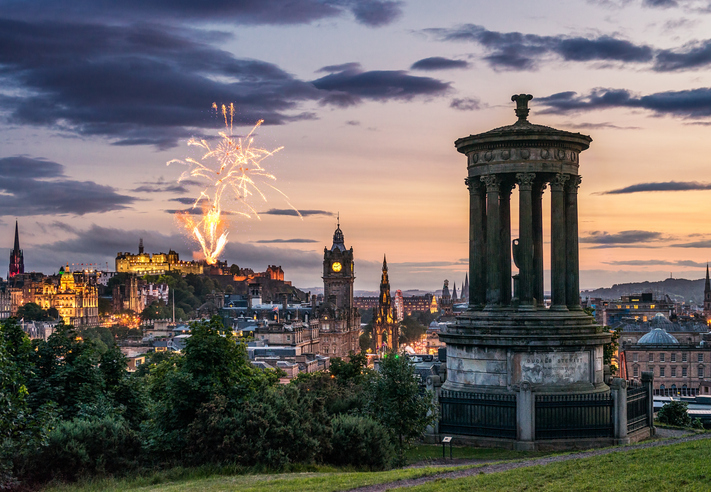 Among Scots, Edinburgh has a reputation for being decorous, civilized, buttoned-down, even a little staid—until August rolls around and culture lovers from around the world converge on its streets for the Edinburgh Festival. During this time, the city becomes the world capital of the arts, the population doubles overnight, and the elegant heart of the city, the Royal Mile, becomes thick with entertainers and round-the-clock comedy shows. Although hundreds of international performers converge on the city for the main body of the Festival, it’s the more adventurous “Fringe Festival” that is beloved by locals.

It began in 1948, when a few experimental acts couldn’t make it into the mainstream theater venues. By the 1960s, the Fringe had become a British fixture, with comic masterminds like Peter Sellers, Dudley Moore, and John Cleese making their stage debuts, and Tom Stoppard putting on his first play. Recent years have seen the discovery of comedians Rowan Atkinson, Eddie Izzard, Steve Coogan, and Billie Connolly. Academy Award-winning actress Emma Thompson got her “big break” at the Fringe, as did actor Hugh Laurie (most famous now for the TV hit House).

Today, the upbeat Fringe Festival overshadows the “official” Festival for many people, which is rather formal. The trick with the Fringe is to not be overwhelmed by the sheer number of performances. Visitors have to choose from up to 1,500 different shows, put on by 700 companies at 200 theaters. Expect anything: stand-up comics from London, acrobats from Barcelona, Latvians doing vaudeville acts. Venues include tiny theaters on the Cowgate, the city’s medieval market, and stone chambers within the ancient city walls where water even drips on the audience’s heads.

For the entire month, talent scouts scour Edinburgh, with competition as intense as on Hollywood Boulevard. Occasional acts of genius are discovered among all the impromptu inspiration, but putting on a low-budget production is still extremely hard work. Cast members often make their own costumes, create their own scenery, and hand out their own leaflets. After months of preparation and hard work, one actor commented “you always end up with 13 pounds ($20) profit. I don’t know why.”