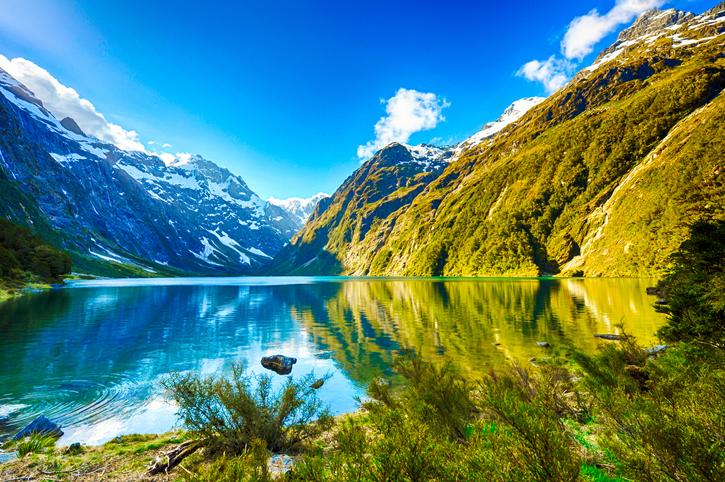 Most of the world has come to recognize New Zealand’s majestic landscape without even realizing it, thanks to The Lord of the Rings trilogy, directed on the islands by Peter Jackson. Although some of the mountains were computer-enhanced (and the locals, even in the roughest Wellington pubs, have better teeth than orcs), the films made unforgettable use of the country’s unspoiled scenery—from its fjords and glaciers to its prehistoric forests and lush, secretive glens.

Curiously, like their counterparts in Scandinavia, New Zealand’s film-makers seem to revel in using their gentle countryside as the backdrop for dramas involving cataclysmic passions. The first true “kiwi” film to be released in the U.S. was Sleeping Dogs (1977), a futuristic guerilla war thriller starring Sam Neill. In 1993, Jane Campion set The Piano’s violent 19th-century love in the sodden and otherworldly rainforest canopies of the south island (the film won four Academy Awards). Peter Jackson’s breakout film, Heavenly Creatures (1994), was based on the true story of two adolescent schoolgirls in the 1950s who commit a vicious murder (one of the girls is the living mystery novelist, Anne Perry). Once Were Warriors (1994) was filled with confronting scenes of domestic violence that exposed the desperate lives of Maoris living in New Zealand’s cities.

But the most influential hit by far was The Lord of the Rings series, not just for its international box office take but because its studio would train hundreds of New Zealanders with cutting-edge film skills. Jackson was born in Pukerua Bay on the North Island, and his Camperdown Studio in Wellington has gone on to shoot a slate of blockbuster movies in New Zealand, including King Kong, The Last Samurai, The Lion, the Witch and the Wardrobe, and The Lovely Bones—all making use of the country’s great physical beauty.

Travel to New Zealand with Globus