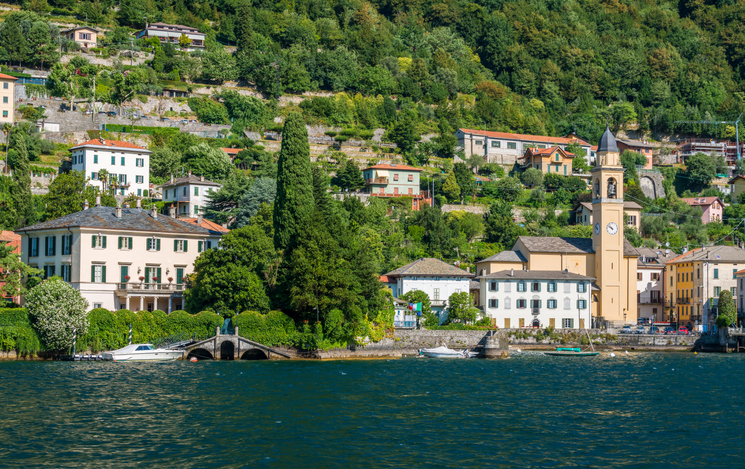 The 2005 Steven Soderburgh movie Ocean’s Twelve may not be a classic, but few who see it will not forget the lovely setting and actor George Clooney’s mansion in the waterfront village of Laglio. The scenes shot there introduced many Americans to Lake Como, one of Italy’s most beloved resort areas, a 30-mile body of water on the Swiss border, 1,350 feet at its deepest and framed by snow-capped Alps.

Laglio (population 900) landed squarely on the European paparazzi map in 2002, when Clooney snapped up the “modest” 25-room Villa Oleandra, then quickly added a connecting property, Villa Margherita. Clooney won over the dubious locals by writing them a public letter signed “George” that apologized for any “inconvenience” his high-profile presence might cause. He also managed to gain council approval for massive renovations to his villas—and was even made an honorary citizen. But residents were distressed to learn in 2005 that Clooney was also trying to buy the small public beach on the lake, their only access to the water. He backed down in face of protests, and his glamorous presence began luring thousands of day-trippers to the village, tripling real estate prices. Owners soon advertised not only their lake views, but the fact that they were “only 10 minutes from Clooney.” Local restaurants showed photos of George in town with friends like Matt Damon and Michael Douglas, adding to the cachet of the area, whose residents already included Sting.

The dramatic beauty of Lake Como has actually been drawing celebrities since the early 1800s, such as Caroline of Brunswick, who built the sumptuous Villa d’Este in 1815—now a five-star hotel. Even before that, Italian nobles built splendid estates here as their summer homes; many are now tourist attractions, such as the Villa Carlotta and the Villa del Balbianello. The latter was featured in Star Wars Episode II: Attack of the Clones. Fascist dictator Mussolini summered at Lake Como for years and retreated there when World War II was going badly, hoping to escape to Switzerland. In the end, he failed and was executed by Italian partisans. Let’s hope that George, Matt, and Sting don’t lose their popularity in the same way.