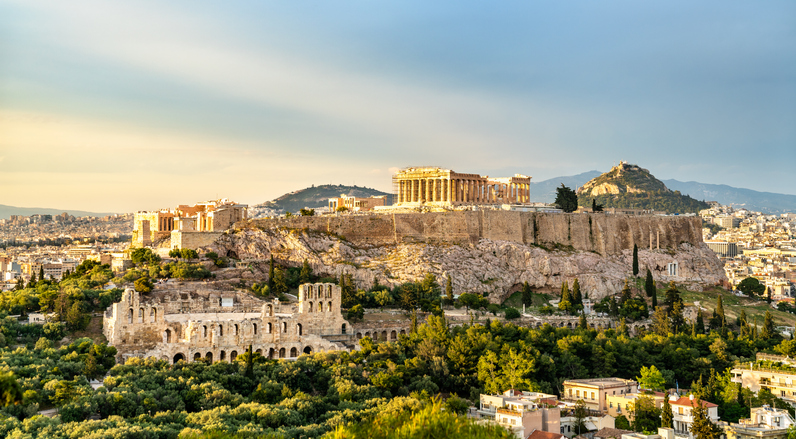 “EVERY GLIMPSE PURIFIES THE MORTAL SOUL.”

Throughout antiquity, Athens was described as the most serene city on earth, with the Parthenon-crowned Acropolis as its spiritual centerpiece. In fact, ancient orator Aristides raved, “Every glimpse purifies the mortal soul.” But thanks to archeological work on the surface of the limestone crag, we know that daily life in the classical sanctuary was surprisingly busy and chaotic.

Throngs of ancient Greek worshippers would zig-zag up the marble steps carved directly into its cliffs and enter through a column-lined hallway called the Propylaea to explore the magnificent array of pagan temples and shrines. The whole precinct was crowded with sacrificial offerings, war trophies, bronze inscriptions, and the graves of heroes. There were hundreds of statues, all gaily painted, with ivory eyes and detailed irises to give the faces expression—the tallest was of the virgin warrior goddess Athena, spear raised against the city’s enemies, whose bronze helmet sparkled in the sun.

Unlike Christian churches, there was no respectful silence in pagan holy places. The Acropolis echoed with the bleating of animals being sacrificed, the singing of priests and priestesses, the lively discussions of Athenian philosophers and their students, even the banter of mystagogi, ancient tour guides who explained the sacred places to foreigners. Some of them became so pushy that one ancient visitor, Varro, prayed, “Athena, protect me from your guides in Athens!”

Travel to Greece with Globus