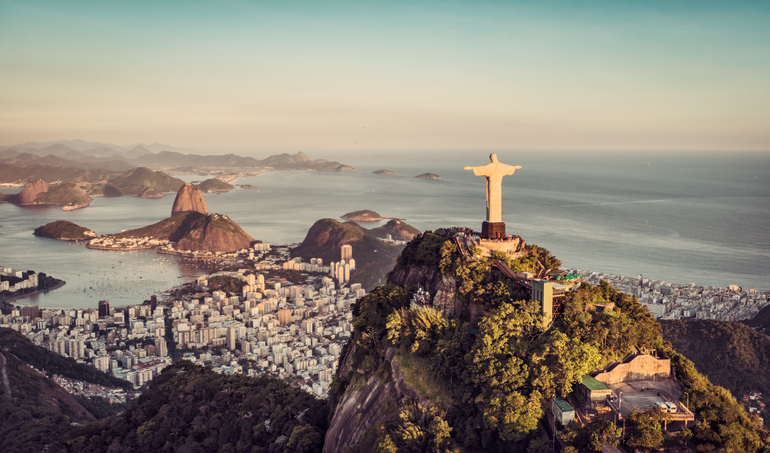 I DON’T THINK BARRY MANILOW HAD THIS IN MIND WHEN HE WROTE “COPACABANA.”

Looming above Rio de Janeiro’s most famous beach, the Copacabana Palace would have to be one of the world’s most infamous celebrity hotels. Modeled on the glamorous resorts of the Riviera, it opened in 1923 and soon became the place to stay for Hollywood stars and European aristocrats during Rio’s “golden age.” When Orson Welles took a suite here in 1942 with the Mexican actress Dolores del Rio while filming a documentary on Brazil, It’s All True, high drama ensued on and off the set. The couple fought constantly, and Welles drunkenly threw the room’s entire furnishings from the window into the swimming pool below. Fifteen years later, in 1957, another room in the Palace was trashed by a movie star, this time Ava Gardner, who was heart-broken by the break-up of her marriage to Frank Sinatra. (No doubt her mood was not improved when, at one ball, an over-enthusiastic Brazilian admirer came up behind her and tore the back off her dress; when she checked out, her room was found to be strewn with whiskey bottles, the mirrors were broken and furniture slashed). By this point, staff at the Palace had become accustomed to volatile scenes from its upper crust clientele.

The newly-divorced Prince of Wales also became so drunk that he went fishing in the fountain, and Lana Turner was at the Copa when she heard that Howard Hughes had dumped her to marry Jean Peters, pushing her to a nervous breakdown. Today, the Copacabana Palace still dominates the city’s iconic beach. Visitors can still stroll into the splendid lobby and ask to see the “golden book,” a guest register filled with famous names from the glorious past: Errol Flynn, Margot Fontayn, Douglas Fairbanks Jr., Clark Gable, Marlene Dietrich, Anita Ekburg, Brigitte Bardot and Brazil’s first international sex symbol, Carmen Miranda. Carrying on that grand tradition, Copacabana Beach remains an exhibitionist’s paradise – the spot to flaunt your latest eye-popping thong and then samba all night while sipping caiparinhas (a potent mix of lemon, sugar and cane brandy called caxaça). But be careful. As Orson Welles would tell you, they really pack a punch.