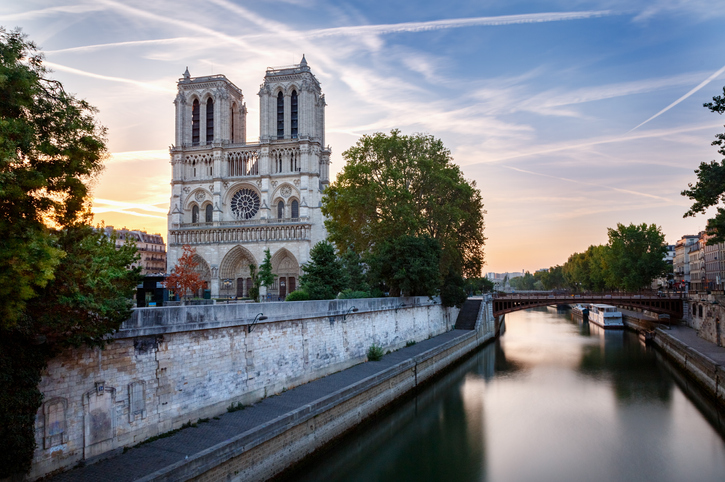 SAVED BY A HUNCHBACK

In 1831, when Hugo wrote his classic novel about a hunchbacked bell-ringer at Notre Dame who falls in love with a beautiful gypsy, the medieval cathedral had fallen on hard times. During the Revolution in 1789, it had been seized, looted of its treasures, and converted into an atheistic “Temple of Reason.” Even worse, after the monarchy was restored in 1815, Notre Dame was used as riverside warehouse, its once-splendid glass windows now dimmed and its facades decaying pathetically above the Île de la Cité.

But Parisian’s indifference to their landmark ended suddenly in 1831, when Victor Hugo published his Hunchback of Notre Dame. The book was an international bestseller and lured armies of tourists to Paris in search of its Gothic cathedral setting. Hugo used this groundswell of public interest to lobby the French government to renovate his beloved Notre Dame. From 1845 to 1864, repairs were indeed carried out. The clogged medieval streets nearby were cleared, revealing the marvelous edifice we see today.

Fans of Hugo’s other famous novel, Les Misérables, should detour one block to the Seine, between the two bridges of Le Pont Notre Dame and the Pont-au-Change. It was to these famously turbulent waters that Hugo sent the obsessive Inspector Javerts, nemesis of Jean Valjean, when he suffered a crisis of conscience over his life-long duty to the law. “There was a splash,” Hugo wrote, “and that was all.”