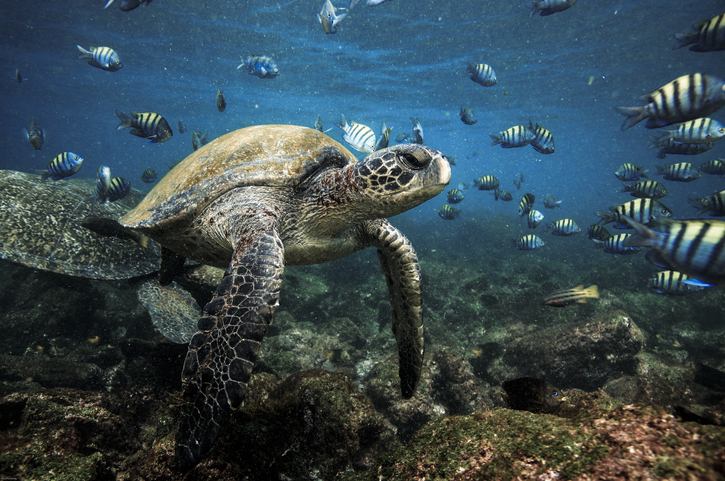 THE GALÁPAGOS ISLANDS ARE HOME TO SOME OF THE RAREST ANIMALS IN THE WORLD.

No animal is more synonymous with the Galápagos, though, than the giant tortoise. Indeed, the saddle-back shape of the shell in many of the tortoise races reminded the early Spaniards of a type of riding saddle called galápago—and this term is also applied to the tortoises. By calling the islands the Galápagos, we are, in essence, calling them the “Islands of the Giant Tortoises.”

The Pinta Island Tortoise (the Geochelone elephantopus abingdoni, for those more scientifically inclined) is just one example, and can only be found in the Galápagos Islands. It is so rare that there is only one. Aptly named “Lonesome George,” this sole representative of this species lives on the Galápagos Island of Santa Cruz, where it was discovered by a scientist in 1971. Since then, Lonesome George has been living at the Charles Darwin preserve, biding his time and, ironically, trying to ward off evolution.

As George’s story has traveled across the world, environmentalists have offered a reward of up to $10,000 for anyone who can provide a Pinta female. The reward has never been claimed, and with George nearing middle age—scientists estimate he’s about 70, while the animal’s average lifespan is about 150 years—the efforts are in full force to help Lonesome George be a little less lonely.

Travel to South America with Globus