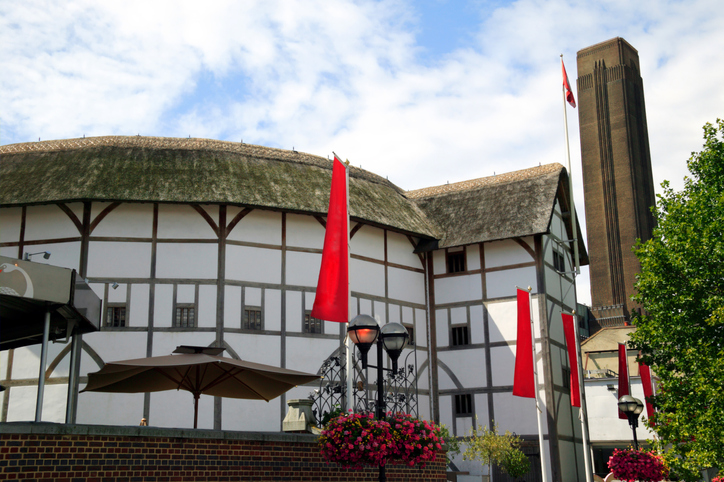 One of the most striking sights in London is a circular wooden building in Tudor style poking above the southern bank of the River Thames – a reconstruction of William Shakespeare’s Globe Theater. Opened in 1997 after exhaustive research, it today is a hugely popular shrine to the greatest playwright in the English language, where you can enjoy live performances in roughly the same setting as audiences 400 years ago, either from gallery seats around the stage or standing in the courtyard as a “groundling.” Its recreation was an improbable, 50-year saga that could be an Elizabethan comedy itself. Far from being concocted by academics, the new theater was the brainchild of a successful American actor named Sam Wanamaker, whose Hollywood roles included The Spy Who Came in From the Cold and Those Magnificent Men in their Flying Machines.

Wanamaker first visited London as a young aspiring actor in 1949, and was shocked to discover that there was no memorial to Shakespeare on the original site of the Globe Theater. In fact, the spot where many of his plays had premiered in the early 1600s was a brewery. Many years later, in 1970, Wanamaker created the Globe Theater Trust to rebuild the theater 750-feet from the original site – a dream that took decades of fundraising and bureaucratic haggling to realize. The historical research was also time-consuming. First built in 1599, the Globe was demolished in 1644 by Puritans who had banned all stage plays, and no drawings of its interior have survived. But the modern architect used etchings of another London theater, The Swan, literary references and archaeological evidence to come up with a “best guess” of the Globe’s appearance.

The builders then used original materials, including “green” oak beams joined in Elizabethan fashion, lime plaster and water reed thatch for the roof. (There is one major concession to modern times: The wooden edifice is coated with a state-of-the-art fire retardant. Even before its demolition, the Globe burned down in 1613 when a spark from a stage cannon went astray during a performance of Henry VIII, and had to be rebuilt by Shakespeare’s troupe). Sadly, Wanamaker died in 1993 and never saw his beloved Globe completed, but thousands of theater-lovers every week can rejoice in his persistence.

Travel to London with Globus

Repost 📷 by @bekkilowrance: The highlight of my

While the famous Victoria Street is always charmin

Repost 📷 by @travelingwithmj: In a state of “

Winter in Zermatt, Switzerland sure is something m

The Pantheon from above, in all its glory. We cons

We're thrilled to be back in Italy on a Globus Esc

Repost 📷 by @ytravelblog: I love seeing a city

Repost 📷 by @funseekersladiestravel: Went to an

Not only do we like to explore Parc Guell for its

These red lanterns are iconic of Japan, a shining