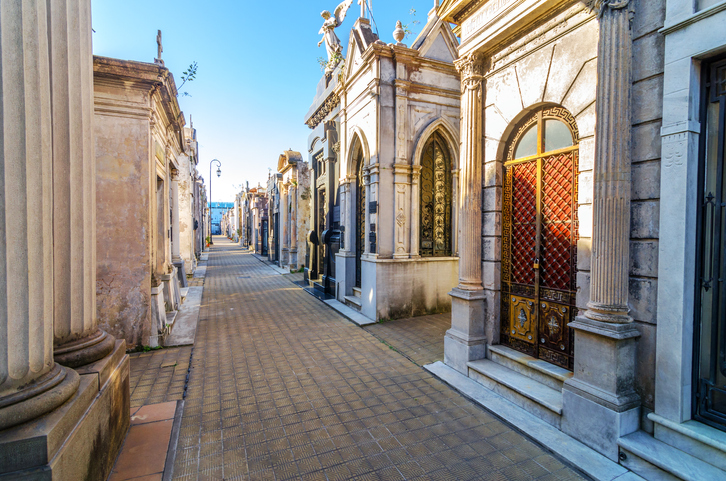 HOW THE LEGACY OF ARGENTINA’S LOVELY FIRST LADY LIVES ON.

Every morning in Buenos Aires, crowds arrive in La Recoleta Cemetery to lay flowers at the modest brass plaque of Evita Peron. These emotional displays that began long before Madonna played her in the film version of Evita, or the Andrew Lloyd Webber musical became an international hit.

In fact, since the very day she died in 1952, Argentines have worshipped Evita’s memory. Her life story has all the elements of a tragic Latin fairytale. Born Eva Duarte, the illegitimate daughter of a poor provincial family, she came to Buenos Aires at age 15 to try her luck as a radio actress. Her beauty and talent carried her to fame. She was already a celebrity at age 25, when she met the dashing, up-and-coming politician Colonel Juan Perón at a political event.

The pair became romantically involved, and they began campaigning together on behalf of the disenfranchised mass of Argentine workers, who were known as the descamisados, or “shirtless ones.” In 1945, when the influential Peron was arrested by nervous rivals in the government, Eva gathered some 300,000 supporters to rally in the streets to secure his release. Peron was elected President the next year, and the feisty Evita became the symbol of Argentina, touring Europe in jewels and silk ball-gowns like a member of Latin royalty.

Her charity work and campaign to give the vote to Argentine women would win Eva the undying love of poor Argentines and she was even declared by Congress “The Spiritual Leader of the Nation.” But in a cruel twist of fate, Evita was soon diagnosed with cervical cancer and died at the age of 33.

The intense outpouring of emotion for Evita throughout Argentina dwarfs the mourning for Lady Di in Britain many years later: Work stopped, pyramids of flowers were laid in the streets, and the tearful crowds were so large at her state funeral that eight people were crushed to death. The Vatican turned down calls for her canonization, but in Argentina, Evita is still a saint.

Travel to South America with Globus