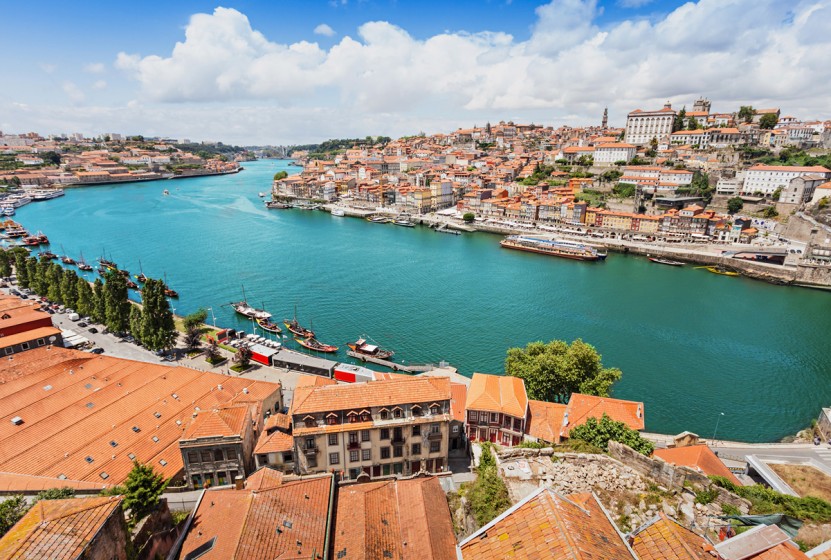 Published online by Travel By Terry | by Terry Denton

One of the absolute best things about being in the travel business is getting to visit places I have never been before.  As Simon Raven said, “…life is short and the world is wide” so it is hardly surprisingly that there are still many places that my foot has yet to touch.

When the chance arose to do a Globus Journeys tour of Portugal and Spain, I was on it like an Anatidae on a Phyllophaga (or duck on a June bug as we say here in Texas).   The extent of my previous knowledge was limited to a vague awareness that some of the world’s best port comes from Portugal.

It took me about half an hour to be smitten like a junior high schoolboy with Lisbon and its environs.  One of my criteria for a great European city is that it must be walkable.   Every other mode of transportation, with the exception of one I am about to mention, moves too fast for my plodding little gray cells to absorb the surroundings.  Lisbon is eminently walkable if you have  a strategically located hotel like the Sofitel Liberdade Lisbon.   Turn right out the front door and you have before you a beautiful twenty minute walk down to the Tagus River.

Another option besides walking is the concept Lisbon has borrowed from Thailand called Tuk Tuks.  They can be found scurrying about everywhere like little pregnant motorcycles.  By sheer good fortune, we selected a Tuk Tuk driven by young lady named Teresa (a name shared by my wife) and whose father owns ColourTrip Lisbon.   She had recently started driving for her Dad and was a delightful hostess for her beautiful city.  You can do thirty minutes, an hour or two.  We did one hour and had her drop us off back at the hotel at the end of one of the most enjoyable sixty minutes in my recent memory.

One of the most striking things about Lisbon is the hills that offer some very impressive vantage points.  The locals know it as The City of the Seven Hills.   From a historical point

of view, the most infamous event in Lisbon’s storied past, without question, was the cataclysmic trifecta known as the Earthquake of 1755.  Striking at 9:40 in the morning on Saturday, November 1st, All Saints  Day, it destroyed most of the city.  I called it a trifecta because it combined a horrific earthquake, a calamitous tsunami and  devastating fires that raged for five days.

Leaving on that less than cheery note, let’s recover our serenity with a glass of wine at the My Story Hotel.  Even though we stopped in a couple of times at their charming sidewalk cafe, I never did learn what their

“story” was.  Maybe I was too awestruck by the modest prices.  Two nice glasses of Cabernet and a large bottle of water was eight Euros (about nine dollars).  That illustrates one of the most appealing things about Portugal and to a lesser degree Spain.  Due, no doubt, to its well publicized economic woes, everything seemed strikingly affordable, especially by European standards.

Another thing I found fascinating was the language.  Portuguese, of course, is one of the five romance languages all of which are largely based on Latin.  I have a passing familiarity with Spanish . . . by that I mean I can get into a conversation in Spanish, I just can’t ever get out . . . and assumed I would be able to pick up a little of the Portuguese banter.  That was not the case.  The “sh” sound is ubiquitous in Portuguese.  Portuguese, to my ear at least, sounds like a Czech school teacher shushing her class of students in Spanish with a decidedly French accent.  I had two separate native speakers tell me that they can understand virtually everything the Spanish say but the Spanish look at them as if they were speaking Mandarin Chinese!

I wish I had a dollar every time over the years I have been told to “put a cork in it.”  I am finally going to take that advice by putting a little cork in this blog post.  Did you know that Portugal produces over half the world output of commercial cork?  Of course you didn’t.  That would make you as smart as me and we can’t have that, now can we?

You may assume that all that cork goes just to stopping up wine bottles but you would be so wrong.  (I know, nothing is more obnoxious than some wise …  hmm, wiseacre with a bit of new knowledge.)  I will spare you my newly garnered insight into the cork tree growing process, fascinating thought it is.  In point of fact all sorts of products are made with cork such as my new cap and the wife’s new posh purse purchased in Portugal.  (Try saying that without pursing your lips!)

As usually, there is so much more to say but our journey beckons.  I will close with this bit of sage advice.  If you want to visit Europe and you’re looking for a place rich in history, gastronomy and hospitality but exceedingly kind to your pocketbook,  Portugal needs to be your next Port O’ Call.  That is, if you don’t mind being shushed all the time.

You can view all the pictures I took on this trip here.